This post describes the tissue-weighted mean, a technique to address a hitherto unrecognised problem in estimating mean tissue microstructure within a region of interest. In brief, the technique provides a more accurate estimate of ROI means in the presence of CSF partial volume.

What is the problem?

However, this approach renders the conventional way of computing ROI means problematic. Figure 1 illustrates this with a toy example using NODDI.

Figure 1: Toy example of an ROI showing that the conventional way to compute the ROI mean can produce inaccurate results.

The figure depicts an ROI consisting of two voxels that cover an area of brain tissue and CSF. The ground truth ROI mean is 0.567, which is the average of the ground truth tissue properties in each sub-square of the tissue within the ROI.

The conventional mean can therefore produce inaccurate results for ROIs which contain voxels contaminated by CSF. This is a problem not only when estimating the ROI mean of NODDI tissue metrics, but the ROI mean of any tissue metric derived from a model that also estimates the amount of tissue in each voxel, such as the free water elimiation (FWE) method (Pasternak et. al. 2009, Mag. Res. Med.).

What is the tissue-weighted mean?

The problem of mis-estimating ROI means in the presence of CSF partial volume is overcome by applying the tissue-weighted mean. This weighted mean sums the tissue metric across the tissue within the ROI and divides by the total tissue volume:


The correct weighting is prescribed for each voxel by using the tissue volume fraction estimates as weights. This calculation is made possible when tissue metrics are accompanied by estimates of tissue volume, as is the case with NODDI and the FWE method.

The example below demonstrates that the tissue-weighted mean produces accurate estimates of ROI means in the presence of CSF contamination.

Figure 2: Toy example of the same ROI as in Figure 1, showing that the tissue-weighted mean accurately estimates the ROI mean when the ROI contains voxels contaminated by CSF.

Evidence of bias in real-world data

Bias is higher in patients and in ROIs that border CSF.

The magnitude of bias in conventional ROI means is significantly higher than zero for many ROIs, for both healthy control subjects and patients with young onset Alzheimer’s disease (YOAD). This is demonstrated by the high number of ROIs with points above the bar in the plot below, denoting that the mean of the bias (the height of the bar) across subjects is not equal to zero. 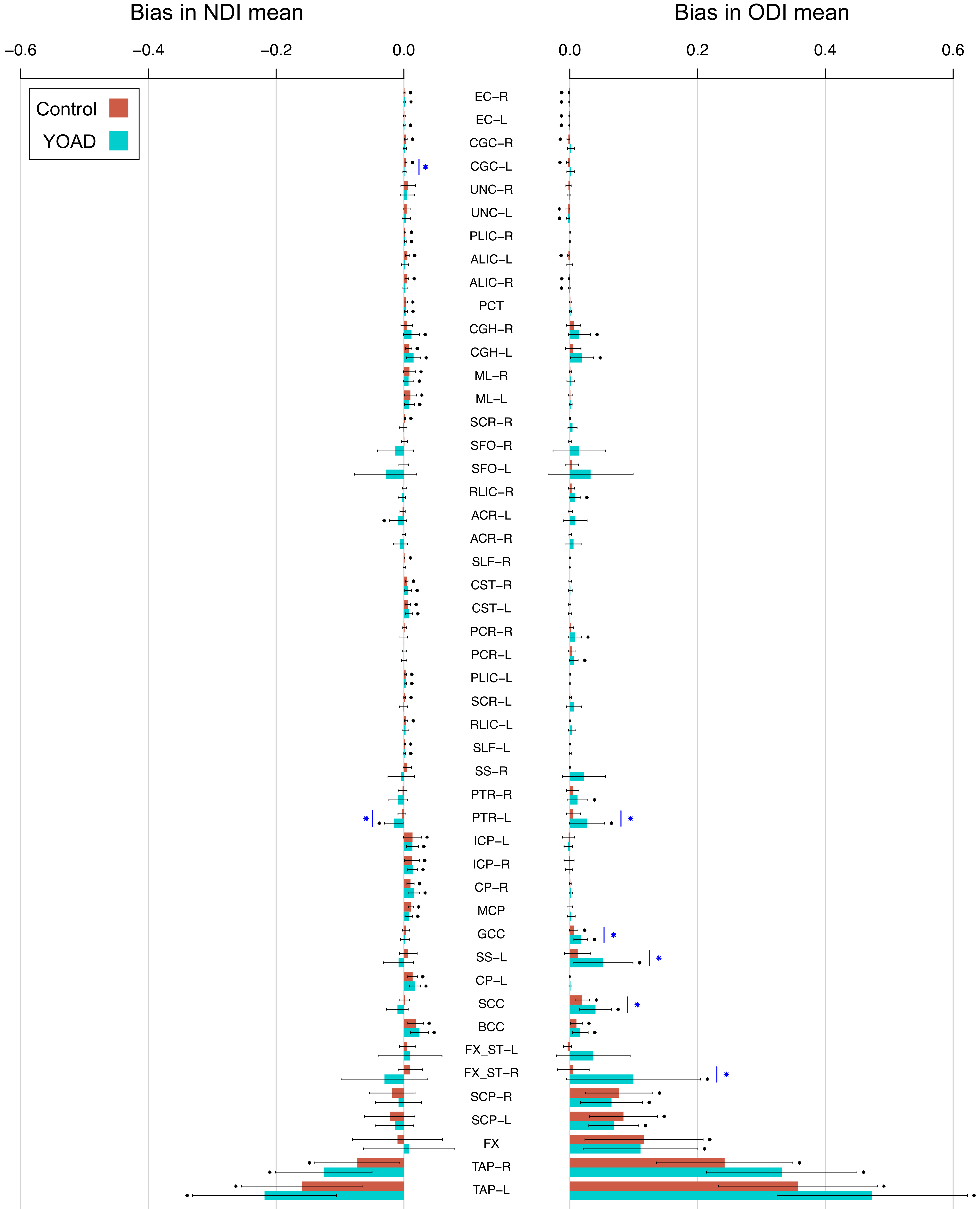 The figure shows that bias is more extreme in the ROIs that border CSF (such as the fornix (FX)) compared to those that do not (such as the superior longitudinal fasciculus (SLF)). Furthermore, subjects with YOAD (turquoise bars) tend to have more extreme bias than control subjects (red bars). This is because YOAD patients have larger ventricle volumes due to brain atrophy. 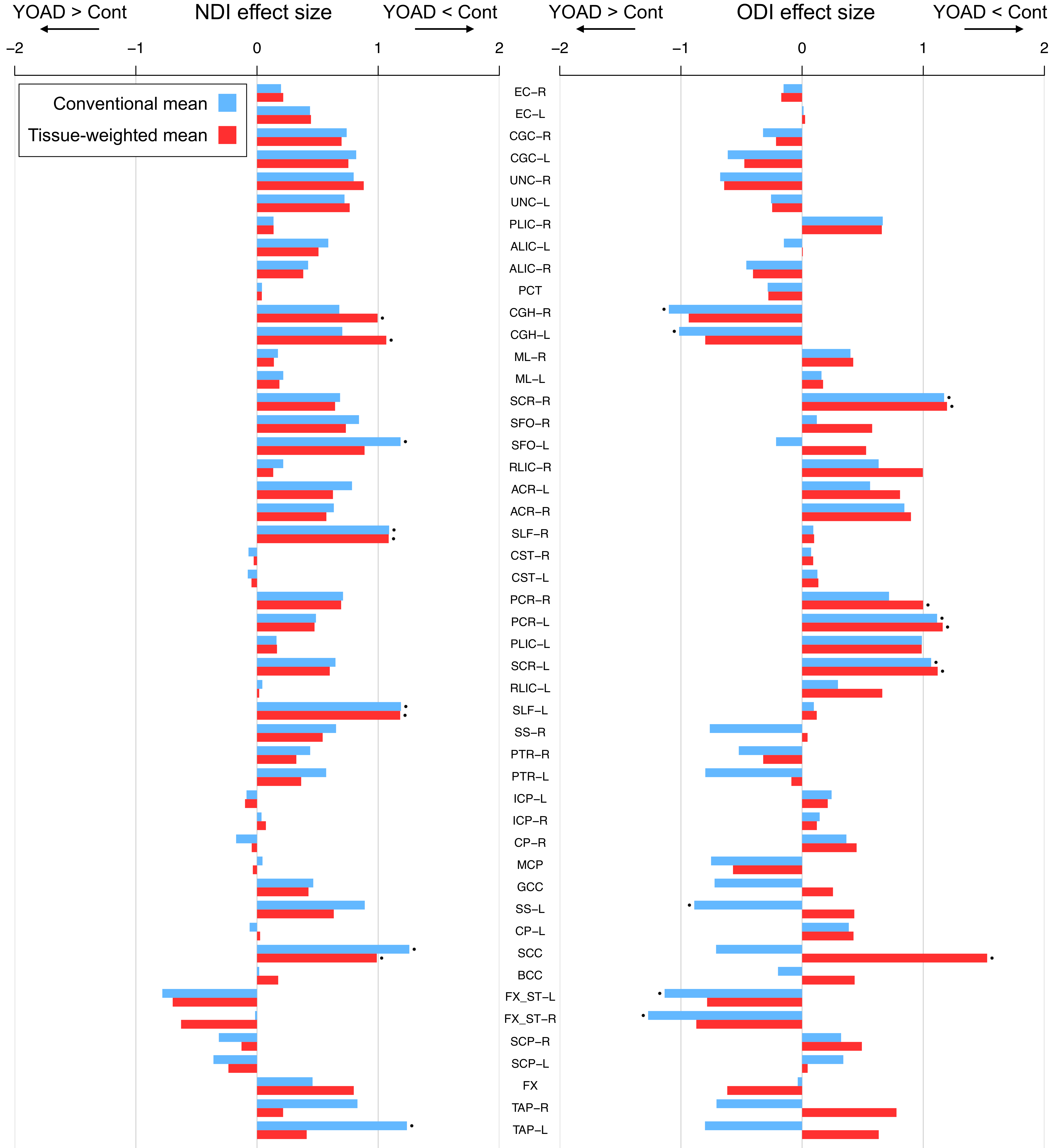 Despite ROIs in higher resolution images containing relatively fewer voxels that border CSF, significant levels of bias are still observed for many ROIs. This is shown in data from the Alzheimer’s Disease Neuroimaging Initiative, where voxels occupy half the volume as for the YOAD dataset. 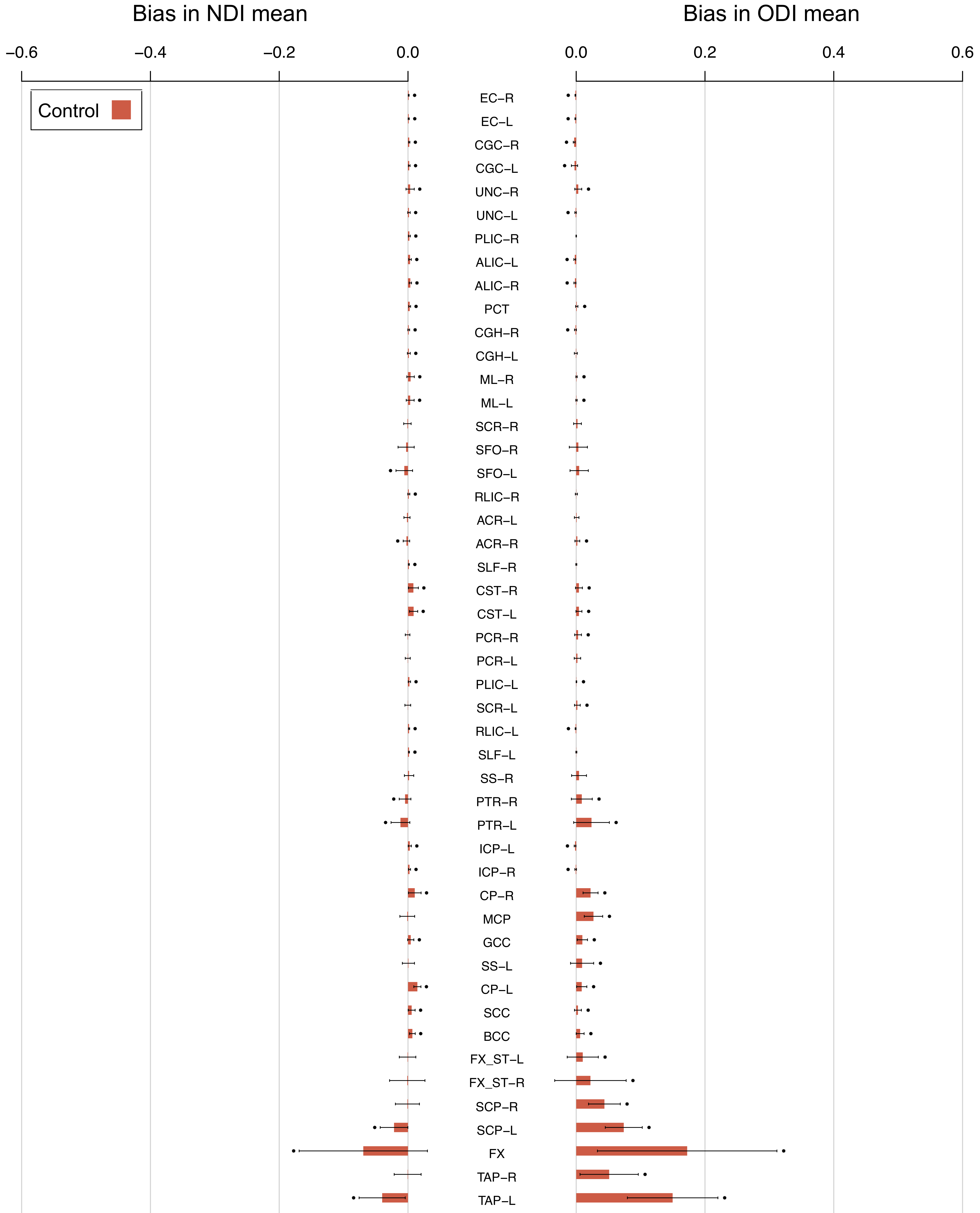 Figure 5: Bias in the conventional means of ADNI data.

As before, bias is higher for ROIs that border CSF. As suggested by the YOAD study, such bias is likely to result in mis-estimation of group differences, due to the greater correction of CSF contamination in the patient group.

Advanced diffusion MRI models can estimate tissue-specific parameters by explicitly accounting for CSF contamination. However, conventional ROI means of such tissue metrics are nevertheless biased when the ROI contains voxels contaminated with CSF (Fig 1, 3). The tissue-weighted mean leverages tissue volume fraction estimates to overcome this (Fig. 2). This allows more accurate estimates of ROI means in the regions bordering CSF and in studies of aging and neurodegenerative disease (Fig. 4).

To read more about the tissue-weighted mean and learn how to apply it to your dataset, check out the official publication and dedicated walkthrough.